One of my favorite science fiction authors, Kurt Vonnegut, once graphed the story of Cinderella in order to examine human happiness. He argued that the story followed a particular story arc, moving from misery to ecstasy, back to misery, and off to a happy ending. "People love that story," he told a New York audience, "And because of it, people think their lives are supposed to be like this...So people pretend there is drama where there is none." This ties in nicely to a recent XKCD comic, Connoisseur, which argued that "Our brains have just one scale, and we resize our experiences to fit." Randall (the comic writer)'s point, here, is once again that we invent drama when our lives otherwise lack it.


Now back to Vonnegut for a second. If Cinderella follows a particular story arc, is it possible that the other Disney stories do, too? Could it be that every single Disney movie, perhaps, follows the exact same story arc? I think so, and I've graphed it. It looks like this: 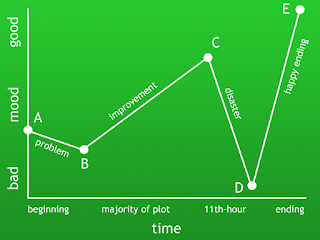 That's all there is to a Disney movie. Yup; we can write every Disney story in just five simple steps. Don't believe me? Let's give it a shot. 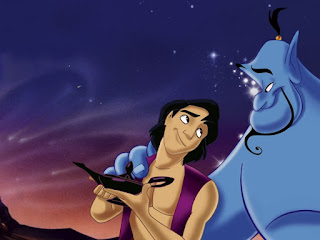 Aladdin
When we enter this Arabian tale, Aladdin is poor, barely scraping together enough bread and melons to feed himself, his money, and random kids they find on the street. On top of it all, they're being chased by angry shopkeepers the whole time. Meanwhile, Princess Jasmine can't find a good husband. And Raja, although certainly worthy of her attention, probably isn't up for the job. That starts us off at point A: sub-par situation.

From there, things get worse as we transition to point B: the problem. Aladdin gets thrown in royal jail for stealing, and Jasmine is told that he's been killed. That's our low point; it's all uphill from here.

On our way to point C (improvement), our hero meets the Genie, transforms into a "real" prince, and begins to win Jasmine's heart on a magic carpet ride. This rising action takes up most of the plot, and viewers are left to expect that, before long, this trajectory will lead to a happy ending.

Then comes the classic 11th-hour move: the point D disaster. Just when things were about to work out, everything unravels. Jafar steals the lamp, uses the Genie, and becomes a powerful Sultan and sorcerer. All of a sudden, Jasmine is imprisoned, the Sultan is stripped of his pants, and the palace is flying through the air.

And then, in classic Disney-arc style, they fix it. Jafar becomes a Genie, gets trapped in a lamp, and everything goes back to normal. The blue Genie is freed, the princess marries the protagonist, and there's a big party. This is point E, the happy ending.

The examples don't stop there. Let's pick up the pace. 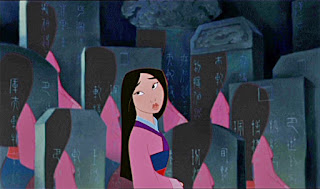 Mulan
A: Mulan is having trouble getting married, and her father is drafted into the war. Whatever can be done?

B: Mulan replaces her father in the war. Now she's in danger, alone, and pretending to be a man. She doesn't know what she's doing, and the regiment is pretty bad in their solider-training. Time for things to start looking up.

C: Over the course of the movie, Mulan meets Mushu, trains hard, brings down the arrows, and restores morale. The soldiers start becoming "men," and they're on their way to defeat the Huns. Mulan even pulls off a heroic cannon stunt, sending snow cascading down a mountain and winning the day. She's riding high.

D: That is, until a battle wound reveals her as a woman. Now she's disgraced. Mushu admits he isn't really a dragon. Even the cricket has a confession: he isn't lucky. To make matters worse, the Huns survived the attack, and they're on the way to the Imperial City to wreak havoc. This is way worse than where the movie started.

E: Not to fear, though. A heroic stunt has Mulan saving the emperor's life, empowering women, and making off with Shang. Mission accomplished. 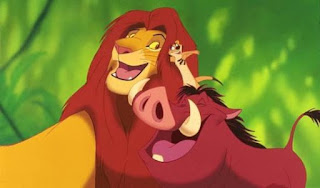 The Lion King
A: Simba doesn't know what it takes to be king, and he's getting in trouble with Dad for following Uncle Scar's advice. One day, maybe he'll understand.

B: Mufasa is dead, and Simba thinks it's his fault. Time to flee.

D: But wait! Scar is evil, and needs to be defeated! Lions are in trouble, with Hyenas on the rise!

E: And Simba saves the day. 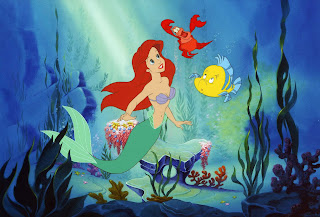 The Little Mermaid
A: Ariel wishes she could be part of their world, because she doesn't seem to fit into hers. She wants to use forks.

B: Eric is hit with a storm and washes up on shore (oh no!). Ariel falls in love with him, but he's a human. Bummer. Time to make a shady deal with a sea witch.

C: We'll spend the rest of the film wooing Eric, trying to get him to kiss Ariel, and learning how to walk on legs. It almost looks like a happy ending.

D: Oh darn; Ursula has Ariel's voice, and she's going to use it to steal the prince. Now they're getting married. There goes the heroine's entire life-plan. And now she's back as a mermaid.

E: But wait! King Triton is here to save the day! He sacrifices himself for his daughter, Ursula gets big and powerful, but Eric smashes her with a ship. The day is saved, and Ariel ends up as a human after all. 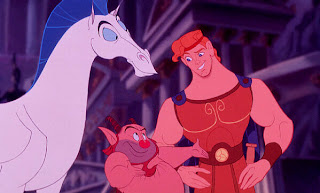 Hercules
A: Hercules is born, but kidnapped at the will of Hades. Zeus and Mrs. Zeus are heart-broken.

B: The kid grows up, but he doesn't fit in. He needs to go the distance and find somewhere he belongs.

C: He goes the distance, going from zero to hero. There's training, flying horses, and a girl, too.

D: Things go bad; Phil gets angry and leaves, Meg seems to be working for Hades, Hercules agreed to give up his strength, and now the Titans are on the loose. That was one quick turn-around.

E: But Hercules gets his strength back, fights off the Titans, and even saves Meg from death, becoming a true hero of godly status.

Having fun, yet? Give it a try yourself. Take your favorite Disney movie, or perhaps even another movie, and see if it does indeed fit into the prescribed pattern.

And then ask yourself: Is all of this just leading us to expect Prince Charmings and happy endings? Are these stories setting us up to strive for a life of drama and villains that simply doesn't exist?

Or, perhaps, do we need the stories? Could it be that we need heroes to aspire to, in order to make truly magical things happen in our world? Do we want to see examples of those who succeed so that we, too, can strive for success? I'm not sure. After all, I'm just a blogger; I'm no Kurt Vonnegut or Randall Monroe.
at 9:00 AM

Email ThisBlogThis!Share to TwitterShare to FacebookShare to Pinterest
Labels: Entertainment

Have something to say? Add to the conversation!

Brian
Expecting to graduate from Tufts University in 2014, I'm here to provide you with insight into the life of Jumbos on the Hill.